Should we dwell on the fact that it’s been ages and ages you read anything here from me?

Right… let’s just kiss, make up and move on, shall we? Lol… truly I’m not being flippant about my long hiatus… It’s just that life has been happening which hasn’t afforded me ample time to share my thoughts here. Whatsapp Stories have been super helpful outlets though…

What did I do? It was an email typo. Okay…okay… I see you rolling your eyes like “how’s an email typo a major blunder?” Well, my good friend, this email was a very important one charging everyone to imbibe the culture of avoiding errors in carrying out their tasks. Lol… You see the irony abi? And guess what? It was sent to the whole organization!

Typing it out now, it doesn’t seem so bad but lemme tell you, the aftermath of that error ehn…  My boss was mad at me… I was madder at me, like “see this alakoba mistake wants to destroy all my prior good work”. It was not funny o. I’m a very careful and detailed person (almost borderline perfectionist, though I like to consider myself a “retiring perfectionist”  😀 ) so you can imagine how I beat myself up over the mistake.

Anyways, I have cooled off and reflected on lessons to (re)learn from what happened. Allow me to share them with you…

So that’s it… these are the major lessons I gleaned from the goof. Also, a great reminder to me to always extend grace to myself and others. At least, I’d be empathetic (rather than unconcerned or critical) if another person tows the same line I did. All in all, thank God for grace he extends to us per second… even though undeserved!

So, over to you… have you had an “oops” moment lately? How did you convert it to an “aha” moment?

My friend sent me a throw back photo from 2013. He was yabbing me about the way my mouth was shaped in the picture. I was dancing in the photo so I guess my mouth was simply aligning with the rhythm. My mouth and hands usually play a huge role in my amazing dance moves 😉 …

Although my friend was out to make fun of me, I was more focused on how on fleek my hair looked in the picture 😁 See for yourself below…

I said to myself “hey, maybe I should rock this hair style again”. Well, I’ve not yet decided if I’d do the hairstyle but the thought got me thinking (yeah, a whole lot of thinking going on 😀 )

We sometimes think we can liken different seasons in our lives to hairstyles. Like something we can “rock” again. But does it really work that way? Is it possible to have a season re-run? Is it very likely to re-live a past season?

Here’s what I think: seasons come and go. One season is usually different from the next. They may be some similarities between 2 seasons but I believe some unique characteristics stand out. If I wanted, I could do the exact same hairstyle I had in that picture and thus experience the exact same feelings I experienced 5 years ago in that picture. But can I experience my pre-wife season now that I’ve been married for 6 years? I don’t think so…

This made me think that instead of focusing on the pleasure (or pain) in past seasons or being fixated on the coming seasons, I should just really live in the season that I am in now. You know why? I think doing otherwise would cause me to miss out on the major fruits I can reap from this season.

I don’t want to miss the growth, lessons and moments I can derive from my present season. I want to live in the pleasure and pain, the highs and lows, the victories and detours. I believe all of these concretize to form the stepping stones that I would ascend to arrive at my future season.

What do you think? 🙂

Sooooo, this is me shooting a Love Arrow your way…

Position yourself well o. You’d be lucky to get shot by this arrow! 😀

I guess we all know that Love is expressed in various ways; giving being one of them. Therefore, I’d like to express my love to you by gifting you something fabulous this “Season of Love”. Just because y’all are the real MVPs 😉

Here’s what’s up for grabs

To win, simply do the following:

PS: The winner will be randomly selected and contacted thereafter to claim his/her prize.

That’s it! Simple as ABC…

I’d love to know what your favorite love song is. Mine is “Stay With You” by John Legend (Mine and Le Hubs’ song 😉 ). What’s yours?

When you say “yes” to comparing,

You say “no” to being awesome… 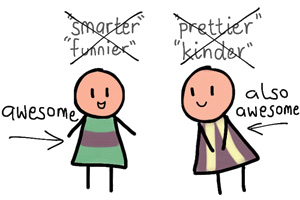 Instead of striving for perfection…

Aim to be better than you were yesterday

But, always your best self…

I am an Arsenal FC fan by marriage. After I said “I do” to a certain fine young man, I adopted his surname and many other things including the football club he supports- Arsenal

I never really cared for football before I met the hubs because I never saw the sense in grown men chasing after an inflated rubber. It was too sweaty and frankly, quite boring. But old things have passed away. In fact, I can now comfortably hold a conversation about football players and the rules governing the game. Things we do for love eh? 🙂

I had an interesting chat with my friend the other night. Let’s call her Mrs O. I was hailing her on her arrangee skills. You know all those people you can allow to handle/organize any event/party/catering/gift buying while you go to sleep? Yeah, that’s Mrs. O… I call her The Fixer. When I want party favours for my daughter’s birthday party? Mrs. O to the rescue. I want suggestions for a nice gift to get my pastor? Mrs. O has it covered. I want referrals on where I can get quality ankara fabrics at a reasonable price? Mrs. O can handle it. I want a big bowl of ofada sauce? Small thing for Mrs. O. Yup! 😀 So I was just twale-ing for her as per some major organizing she did recently and she responded that it (organizing) was her talent and how she sometimes envies my writing skills.

Wiped out as I was, a light bulb came on and 3 letters came to mind: M V P*

Coincidentally, a football match was showing on TV.. Roma was flogging Chelsea 3-0. Hehehe, I just had to chip that in (petty, I know). Anyways, I was thinking of the beautiful concept of team work and how this idea of MVP tarnishes it.

I culled (from kwese.espn.com) the following statement from Arsene Wenger to help explain my thoughts: “I am against it (MVP) because I think it gets in the head of players. We have seen many people only thinking about themselves because they are obsessed by the Ballon d’Or and not by the team performance, and I believe football is a collective sport and we live already in a world where everything is individualized. We want to respect what football is about, first about the team effort.”

Thank you jare baba Wenger. I may not agree with some things you do/say, but I agree with this one 100%.

Now in response to Mrs O’s reference to my writing skills, I told her that we all have our different gifts. No one is more important than the other. We all complement one another. This is what makes the world colourful and beautiful. Imagine if everyone in the world was a writer or a fashion designer or a fixer like Mrs O? Me thinks the world would be very bland indeed. You know what would be more interesting? I’d write something the fashion designer would enjoy reading. Then she would make me a dress which I would wear to slay at an owambe organized by Mrs. O. See? All the dots connect this way and it makes more sense because then there will be people that actually benefit from your gift.

The way I see it, this notion of MVP is a no-no because it leads to…

Even Mother Nature opposes the MVP model. Truth is, nature thrives on interdependency. There is no MVP. Rain is not more valuable than sunlight when it comes to rainbow formation. Neither is a spermatozoon more valuable than an ovum for a foetus to be made. These elements complement each other to create something beautiful. That’s the way it works. Let’s take a cue. Why do humans like to complicate things sef?

So my dear friend, do not think you have nothing to offer the world. God didn’t make anyone talentless. That gift of yours you’re despising is needed by someone else as a solution to a problem. You too are the real MVP joor. Also, my dear CR7 sorry, my other dear friend, the world does not revolve around you. Biko, come down off that high horse. It’s not that serious you hear?

We are all good at different things and that’s OK. So, here’s what I’m going to do. I’m going to take the M out of the MVP, OK? Thank you very much.